If you’re a homeowner, congratulations are in order; you make up the 65% of Americans who can proudly say they have achieved the American dream. While this is something to celebrate, there is a downside insofar as you are now both a homeowner and landlord, which means you are responsible for maintenance costs associated with the general upkeep of your home. According to Forbes, it is best to set aside 1% to 4% of the purchase price of your home each year to pay for routine maintenance projects. And this can come in handy for those exceedingly costly projects, electrical repairs being one of them.

Signs Your Home Is in Need of Electrical Repair

Some electrical problems can be quickly remedied by replacing a burnt-out lightbulb or resetting your fuse box, but sometimes hiring a professional to perform the necessary 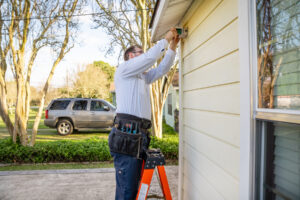 Flickering lights – Sure, most light bulbs flicker a couple of times just before they blow out; however, persistent flickering is another matter entirely. More often than not, it points to a need for electrical repair. According to a study published by the  University of California Irvine Environment Health and Safety, frequent power surges can cause lights in one’s home to flicker. And the culprit is usually faulty wiring. It is best to have this kind of electrical problem resolved as quickly as possible. Faulty wiring can lead to damaged electrical fixtures and appliances. It can also increase the risk of electrical fires.

Burning odor – The smell of anything burning is unpleasant, but when brought on by an electrical problem, it can also be dangerous. Most licensed electricians in the U.S. say a burning odor could indicate the electrical system in one’s home is generating too much heat, which can increase the risk of a house fire the longer the problem goes unresolved. That said, it is best to have the system inspected by a professional sooner rather than later.

Circuit breakers that frequently trip – Most homeowners have experienced an occasional circuit breaker trip. And they seldom point to anything serious, but when they happen too often, it might be time to call an electrician. When circuit breakers trip too frequently, it usually means one of the circuits in a home is constantly getting overloaded. Failing to call an electrician to perform the electrical repair necessary to resolve the issue can increase the chances of a home’s electrical fixtures, not to mention electronics and other devices connected to them, being damaged or destroyed.

Sparking – Whenever there are sparks, fires are usually not too far behind. That said, consider sparking a clarion call to have the issue addressed and resolved by a licensed electrician as soon as possible. Like buzzing and popping sounds, defective outlets or faulting wiring is usually at the heart of most sparking problems.

In summary, failing to get a needed electrical repair taken care of is something that homeowners should avoid at all costs. As a homeowner, it is in your best interest to set aside enough money so you can take care of such problems before they have a chance to go from bad to worse.